In the wake of George Floyd’s murder, a wave of protests against police brutality and systemic racism seized the attention of the country. For weeks, coverage of these demonstrations dominated the news cycle as they spread from Minneapolis across both the nation and the world.

Portland, Oregon, has seen hundreds of protesters take to the streets every night for the last seven months. These protesters have been covered in tear gas, doused in pepper spray, tackled, arrested, and struck with batons by local, state and federal law enforcement officers while peacefully exercising their First Amendment rights. These conditions are dangerous for any demonstrator, but for people with disabilities, they are even more so, and can be deadly.

The Disability Rights Legal Center (DRLC), with co-counsel Miller Nash Graham & Dunn and the Civil Rights Education & Enforcement Center, represents protesters in Portland who have been shot without warning, arrested without cause, and separated from their service animals and mobility aids without reason. After efforts to informally resolve the matter failed, the DRLC litigation team filed the initial Complaint in the District of Oregon in November 2020.  Yesterday, February 9, 2021, the team filed a motion for preliminary injunction seeking an order preventing the local, state, and federal law enforcement from continuing to violate protesters’ rights. See the motion here.

Preliminary injunctions serve to prevent one party from engaging in certain behaviors until a conclusion is reached in the case. The plaintiffs in Wolfe et al. v. City of Portland et al. are requesting that law enforcement agencies:

Each day that passes without relief puts the Wolfe plaintiffs and all other protestors with disabilities in Portland at risk of further violence. In a case like this, time is of the essence to avoid imminent harm. DRLC hopes the Court will agree that an injunction is necessary to allow protesters with disabilities to exercise their constitutional rights of speech and assembly.

Read more about this case: 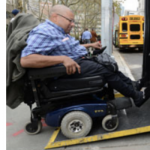