College grad thanks DRLC for assistance with SAT accomodations

Sunjay Smith and his family approached DRLC for assistance in securing accommodations to take the SATs several years ago. As a result, he was able to attend college and graduate with honors. It has been extremely gratifying to see a bright young student given the opportunity that he deserves. 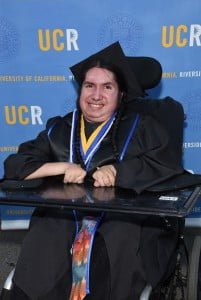 After his graduation from UC Riverside, he wrote us the following letter:

When I was six, I was hit by a car. I was given less than a 1 percent chance of survival and my family was told that even if I did survive, I would be in a vegetative state forever. But my family didn’t listen to the doctors who insisted that they be able to pull the plug on my life, and they fought to keep me alive.

When I finally got out of my coma, I had quadriplegia. My family now had to fight very hard for me to get an education because the school districts thought it was not worth it to educate me. They only wanted me to get an hour of education a day. I suffered a lot of racial and disability discrimination throughout my educational career. For instance, I was told I had to come to school “dressed like an Indian” or I would be forced to wear a fake Indian headdress all day. When I complained, the teachers withdrew me from the free lunch program. But my family fought for me. They stressed the importance of an education and going to college. Because of their example, it became my big dream to one day go to college in California.

After high school, I moved to California to pursue my dream of going to college here. But when I got to California, I had tremendous difficulties getting accommodations to take the SAT. The SAT board gave me inadequate accommodations, but I figured I would do my best with them. However, the testing centers all refused to give me any accommodations at all. I was going to have to sit there with no one to assist me, which means I wouldn’t be able to answer any questions at all since I am paralyzed. I contacted every center in Riverside County, Los Angeles County, and Orange County, and not a single center would agree to implement the accommodations, inadequate as they were, that I had been granted. When I called the SAT board, they told me that there was nothing they could do.

My efforts to get accommodations had been going on for close to a year. Meanwhile, UC Riverside, where I wanted to attend, told me I had only a week left to take the SAT or they would not consider my application. I was so depressed because it looked like my lifelong dream of going to college was never going to happen.

That was when Disability Rights Legal Center came to my rescue. DRLC contacted the SAT board on my behalf and, through negotiations with the SAT board, was able not only to get accommodations so I could take the test that week, but adequate accommodations that I didn’t even think would be possible so that I could be successful taking the test. As a result, I was able to do well on the test and was admitted to UC Riverside.

At UC Riverside, I became the President of the Student Disability Union and did lots of work to educate the UCR community about the disability community. I got a Disability Studies class added to the UCR curriculum, the only such class that exists at the school. I also co-sponsored with the Student Disability Union, in conjunction with DRLC, a Special Education Academy of the Riverside community. I wanted other parents in the community who have children with disabilities to benefit from all the advocacy that I have received from my family and from DRLC that allowed me to get an education.

I had a good experience at UC Riverside. But I still faced prejudices many times. For instance, when I first came to UCR, I was told I should visit the Department of Rehabilitation to see if they had resources for me. But when I went there, the staff person said to me that I was “too disabled.” She said the Department of Rehabilitation could not help me because “an education would be wasted” on me. Then when I was awarded the Dean’s Academic Achievement Award for having a GPA over a 3.9 in my senior year, UCR administrators forgot to make my path to the stage wheelchair accessible. The reason, a staff person told me, was that “it never would have occurred to me that someone like you could be getting an award.”

But these problems I have faced are all the more reason why it was important for me to go to college – to show the world that peoples with disabilities are worth educating. And I never could have received my education without the help of Disability Rights Legal Center.